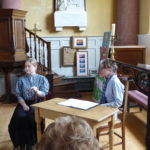 To view the short excerpt of a play performed at the Service of Commemoration of Constance Smedley in West Wycombe, England 20 May 2017, click on The Amazing, Preposterous Constance Smedley. The play,  by Frank Hatt, was first performed by the Cotswold Players in 2015.

9 March. On this day in 1941 Constance Smedley died. She was a proud Brummie and an internationalist, a feminist and suffragist, an illustrator and stage designer, a journalist, novelist, playwright and creator of pageants, a lifelong campaigner for the poor and for the arts, and for the right of poor people to have access to art. She lived with disability, getting around on crutches in her youth and in a wheelchair from her mid thirties. She was instrumental in founding the Lyceum Club (today the International Association of Lyceum Clubs). This was to promote cultural exchange between women of all nations: the London branch was equipped with a library and a permanent art collection. It offered young professional women somewhere affordable to reciprocate hospitality and entertain friends and contacts, comparable to the London men’s clubs. (Smedley announced in March 1903 the upcoming elections to appoint the club’s Provisional Committee, which turned out to be a roster of distinguished female names.) The International Association of Lyceum Clubs might be regarded as sufficient life’s work, sufficient legacy, for one woman.

In 1909 Smedley married the artist and poet Maxwell Armfield, who was a pacifist, a homosexual, and a descendant of Winifred, Lady Nithsdale (see blog post for 5 March). Their unconventional marriage lasted until Smedley’s death, and the couple collaborated across a range of genres, mostly experimental. They settled in the Cotswolds (then a byword not for tourist attractions but for rural poverty and deprivation), where in summer 1911 they put on the extraordinary “Pageant of Progress” or “Pageant of the People”. For this Smedley managed a cast of 1,300 amateur performers, eight stage-managers, and sundry horses, ponies, and flocks of sheep on loan from performers. Spin-offs from this extraordinary project included the Cotswold Players (still active today), a bookshop, and a free library. The pageant ran through various famous events and processes in British and local history, all seen “as they affected the people’s progress.” Local people who saw it, often with no experience of theatre-going, were profoundly moved.

The Cotswolds caused Smedley, hitherto a Tory by inheritance, to move sharply to the left in her politics. She carried her idealism and activism back to London to run the Greenleaf Theatre and theatre school, to the USA for the years 1915-22, where she and Armfield left their impress on theatre movements in New York and California, and she was no less active in her late years back in England.

She was always an artistic force to be reckoned with. As a very young playwright she sent her Mrs Jordan (about the famous eighteenth-century comedienne, who was a heroine to Smedley “because of her breeches roles and her bold and skilful navigation of scandal over her royal lover”) to Mrs Patrick Campbell, who put it on stage in London for a successful run. As a journalist she reported suffrage militancy for the Daily Mail and authored an anonymous, popular-style polemic titled Woman: A Few Shrieks! As a novelist she dealt with a series of issues: women’s life-choices (the trammels of girlhood, the challenges of social activism, the experience of the workplace); the state of marriage and the family (as a site of oppression or of world-changing idealism); rural politics and economics (through the fight to save a piece of common land); the relations between motherhood, masculinity, and militarism; the often hostile yet potentially cross-pollinating cultures of England and the USA, or of business and the arts. Through almost all her fiction runs the strain of opposition to war.

Constance Smedley is by no means forgotten; her continuing creative relevance was well celebrated in 2010 by the Stroud Theatre Company. But there is surely room for research into her part in the history of the pageant. Pageants, as they were done in mid-twentieth-century villages and country towns, were unambiguously heritage history. A small community made a massive effort and came up with as pretty a version of its own story as it could manage. This folk art, disdained by the sophisticated, is wonderfully rendered by Virginia Woolf in Between the Acts, where a woman artist puts her life-blood into the community’s picture of itself, and where its contemplation of that picture is shadowed by the airborne threat of ongoing history. (Woolf does not, like T. S. Eliot, take the pageant and render it literary.) Constance Smedley’s “Pageant of the People” came only a few years after Cicely Hamilton’s “Pageant of Great Women” – and, with due respect for Hamilton’s creative and political achievement, Smedley’s determinedly anti-heritage national and local vision was more original than Hamilton’s roll-call of female achievement. Three decades elapsed between Smedley and Woolf, and three more between Woolf and Ann Jellicoe’s pageants or large?scale community plays. Smedley and Jellicoe have much in common, with their vision of performance art as mediated by the artist but created by ordinary people, as embodying a questioning, anti-establishment approach, and as consisting of process more than of product.

All information here is from Orlando, an electronic resource published by Cambridge University Press, by subscription, at Orland Cambridge